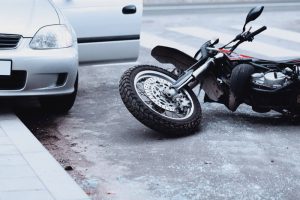 It might be obvious to many people that riding a motorcycle is dangerous. Even if a motorcyclist takes the necessary safety precautions, preventing an accident is impossible. Riders can’t predict if drivers will follow traffic laws or do something to create a dangerous situation.

While that may be true for some drivers, many want to avoid causing an accident with a motorcyclist. The problem is that it’s difficult to notice a motorcycle traveling near a car or truck because it’s significantly smaller. One main reason collisions happen is motorists can’t see bikers in their blind spots.

While low-speed collisions involving motorcyclists do happen, high-speed crashes also occur. Some riders stick to back roads and residential areas with low speed limits. However, if a motorcyclist takes the highway, they encounter drivers traveling at 60 miles per hour and faster.

Motor vehicle collisions can happen at any speed in any situation.

Myth 3 – Helmets Are Useless to Motorcyclists

Whether a motorcyclist crashes into a car, truck, or stationary object, such as a tree, the violent impact can cause severe injuries. Wearing a helmet can’t prevent all injuries, but it can protect your head and brain.

When someone doesn’t wear a helmet and hits their head on the ground or another vehicle, the consequences can be fatal. Helmets offer a certain level of protection even during high-speed crashes. It might not prevent a head injury, but it could save the rider’s life.

Myth 4 – Streets Are Safer than Highways

Side streets and roads with low speed limits can be safer. However, people break traffic laws and can drive above the speed limit anywhere. Motorcyclists are at risk of injury no matter where they decide to ride.

Although highways might seem more dangerous than side streets, they have benefits in-town roads don’t. Roads that run through towns and cities contain intersections, turning lanes, and vehicles traveling in the opposite direction with no barrier between the lanes of traffic. Encountering dangerous situations is far more likely on the street than on the highway.

This is a potentially deadly myth. If a motorcyclist is about to collide with another vehicle, they should not lay down their bike to soften the blow of the impact. All that will do is cause additional injuries. The rider could get serious road rash or deep lacerations on their body. They also risk sliding under a car and getting run over.

Myth 6 – A Motorcycle Accident Lawyer Is Too Expensive

Accident victims often choose not to seek legal representation because they think they can’t afford it. However, many personal injury attorneys take cases on contingency. That means you retain their services without upfront fees or costs. You won’t have to pay unless they recover compensation for you.

Myth 7 – Motorcyclists Are Reckless and Always at Fault for Accidents

Yes, some motorcyclists ride recklessly and endanger people around them. However, not all motorcyclists are responsible for accidents with other vehicles or even single-vehicle crashes.

Other drivers could be liable for not checking their blind spots before merging and end up sideswiping a rider next to them. Or a motorist might run a stop sign and crash into a motorcyclist already in the middle of an intersection. Someone other than the rider causing motorcycle accidents is a frequent occurrence.

Any amount of alcohol can impair a person’s faculties. That’s why DUI laws exist. It might seem safer to drink and ride a motorcycle than drink and drive a car, but both are dangerous.

Even if a motorcyclist only has one drink, it’s enough to cause a slower reaction time, altered sensory perception, reduced motor function, and poor decision-making skills. Riding sober is the best option.

Gibson Hill Personal Injury represents clients injured in Texas after motorcycle accidents. We will create a personalized strategy to meet your needs when you hire us. You can depend on us to fight by your side for the justice you deserve. We know how to maximize the value of any case and recover the compensation necessary to cover your necessary medical treatment and other expenses.