Four Things You Should Never Say After a Car Accident 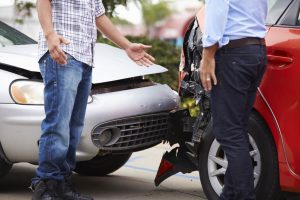 A car accident can be shocking to the drivers involved. The chaos of a car accident combined with the adrenaline rush that most drivers experience afterward can cause motorists to say things that later end up hurting their legal claim for compensation. You should familiarize yourself with what not to say after you have been involved in a car wreck. We have compiled four common statements that you should never say after a car accident.

Many drivers apologize as a reflex reaction immediately after a crash. Some drivers do it thinking they caused the crash. Others do it as a means of showing sympathy or empathy during a traumatic event like a car accident. However, you should never say “I’m sorry” or offer apologetic words after a car accident. Even if you think you bear some responsibility for the accident, you may not have all the facts. Instead, the evidence may later show that the other driver caused the crash. But if you accept responsibility immediately after the accident, it can be harder to make an argument that the other driver was at fault. If you say sorry purely as a means of showing sympathy, you can also undercut your credibility if you later pursue a legal case arguing that the other driver caused the accident.

For the same reasons, you should never say something like “I didn’t see you,” or other statements discussing what you saw or did prior to the accident. The physical evidence may show that the other driver caused the crash. But by offering up or admitting to things you saw or did in the moments leading up to the collision, you may give the other driver or the insurance company evidence to argue that you bear some of or even all the fault for the accident. Instead, include the details about the moments leading up to the accident in the statement you give to an investigating police officer and in the discussion between you and your attorney.

You might also want to reassure the other driver after a car accident by telling them that you “feel fine” or were not injured. You might tell the other driver that you were not hurt if they ask you if you need 911. However, unless you require immediate medical attention, you should avoid talking about injuries immediately after a car accident. Many car accident injuries take days or even weeks before they begin causing noticeable pain or symptoms. If you claim at the scene of the car accident that you did not suffer any injuries, it can hurt your credibility if you later file an injury claim from the accident. The insurance company may try to argue that you are exaggerating your injuries or that the injuries you have claimed were caused by something other than the accident.

“Let’s Settle This on Our Own”

A car accident is enough to ruin your day. For that reason, you may suggest to the other driver that you try to settle the accident right on the spot without getting the police or insurance companies involved. However, you should never suggest this for several reasons:

Contact Our Car Accident Attorneys for Help with Your Case

When you have been injured in a car accident through no fault of your own, call Gibson Hill Personal Injury at 512-580-8334 or fill out our website’s contact form for a free initial case review with our seasoned car accident attorney. Let us help you understand your legal rights and options for pursuing a claim for compensation, and how we can provide assistance with all of the details of preparing and advocating your case.