Get a FREE Consulation
Home > Car Accident > How to Measure Shared Fault in a Car Accident Written by: TY Gibson and Brett Hill Last Updated : July 28, 2022

How to Measure Shared Fault in a Car Accident 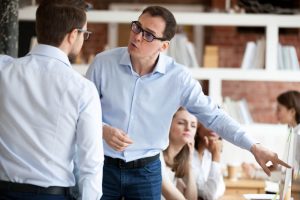 You have a right to seek compensation from the at-fault driver if you suffered injuries in a car accident caused by someone else. However, it’s vital to understand how your actions might negatively impact the outcome of your case. The jury could diminish the compensation you receive if they determine you share any fault for the crash.

Sometimes, multiple drivers are responsible for causing an accident. One person could have exceeded the speed limit while someone else texted at the wheel of their car. If a jury assigns fault to both motorists, the plaintiff could be awarded reduced compensation.

It can be challenging to measure shared fault following a car accident. The percentage calculated by the investigating parties typically bases the number on opinion. It’s an entirely subjective process that depends on the factors associated with the case.

Although you might believe the other driver should be liable for your injury, a jury could disagree. They might think your actions were just as negligent and decide you bear more fault than someone else.

It’s crucial to hire a car accident lawyer immediately to assist you with your case. Navigating the complex process of shared fault requires experience and knowledge of state laws.

According to Texas statute § 33.001, proportionate responsibility prohibits a plaintiff from recovering compensation for their losses if their percentage of shared fault is more than 50 percent. In other words, in a two-person car crash, if the jury believes your responsibility for the accident is greater than the other party’s, you can’t receive any compensation for your injury.

For example, let’s say you were involved in a car accident and suffered $100,000 in losses. The jury might assign the other driver with 80 percent of the fault for driving under the influence at the time of the crash. However, the jury assigns you 20 percent of the responsibility for running a red light. Despite requiring $100,000 in compensation to cover your losses, you can only receive up to $80,000.

Since proportionate responsibility involves a bar to recovery, you could end up without a financial award. If the jury determines you were more than 50 percent at fault for the car crash, you won’t be entitled to any amount of money.

Proportionate responsibility only applies to lawsuits. However, the insurance company could use shared fault to deny your claim. If the insurance adjuster discovers you were partially to blame for the accident during their investigation, they could use that information against you.

Insurance companies don’t want to accept liability for their policyholders. When they receive a claim, they try to find valid reasons to deny it or offer a low settlement. Shared fault is the perfect excuse to reject someone’s claim to save money and avoid a settlement payout.

The insurance adjuster can review all relevant factors and determine whether you are entitled to a settlement. Negligence is a common contributing factor in insurance claims. The adjuster will review the police report, witness statements, and other evidence to calculate your degree of responsibility.

Common forms of negligence that can affect whether you secure compensation include:

Even if the other driver’s actions were reckless and put your life in danger, the insurance company has every right to deny your claim if they find evidence that you were at fault. Insurance claims are dependent on liability. If the policyholder isn’t liable for the accident, the insurance company shouldn’t be forced to provide a settlement to compensate for your losses.

How to Calculate Shared Fault

The investigating parties can use the available evidence to determine whether shared fault exists in a car accident case. Such evidence might include:

There isn’t a formula to measure shared fault. The determination depends on what the evidence says. If an officer showed up at the scene to investigate, they might have included details regarding the possible cause in their report. They can write a brief description of the events leading up to the accident based on the statements they receive from the drivers and witnesses.

When an insurance company or defense attorney reviews the police report, they can decide if they believe the accident victim is partially responsible. It’s up to these parties to assign the percentage of fault they believe is accurate based on the facts of the case.

Some forms of negligence are more damaging than others. For example, driving under the influence could hold more weight than exceeding the speed limit by five miles. The jury might assign the drunk driver with a higher percentage of shared fault due to the reckless nature of the offense.

If you suffered injuries in a car accident due to someone else’s negligent actions, do not hesitate to contact the Texas car accident lawyers of Gibson Hill Personal Injury. We have fought for the rights of accident victims in Texas since 2013. We will thoroughly investigate the crash to determine whether you share fault for the crash and pursue the compensation you deserve when you hire us.